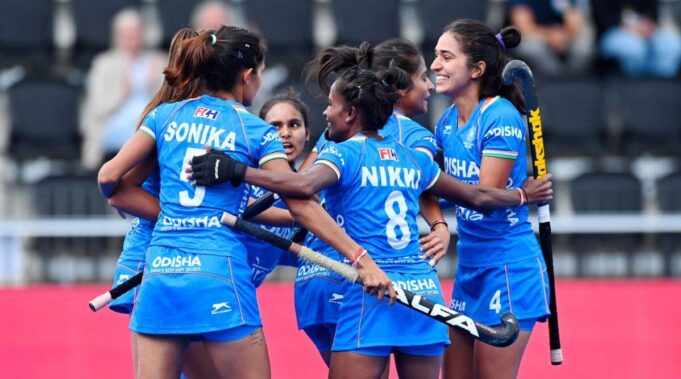 Despite winning many penalty corners,India are not able to convert these chances into something significant.

This tale has been continuing throughout the whole series and has come back to bite India.

There were just 39 seconds left in the third quarter and Vandana Katariya was lingering around the left of the goalmouth, she swooped onto a well directed deflection throwing herself into a pouncing equaliser helping India neutralize the score against China making it 1-1 in the pool game of the Women’s Hockey World Pro League in the Netherlands.

Even the commentator exhaled “At last the Indian corner comes good,” as India had created 5 penalty corner chances previously in the game but managed to score none until now.

The dutch coach of team India Janneke Schopman has scored previously in such pressure situations in similar fashion and that would show how her experience and expertise as a coach has helped the team grow.

There was a nervous sigh of relief when the match ended 1-1 against China as a draw is still better than a loss, but is it the result India desired for ? Maybe not.

On either side of the game against China, India managed to earn a staggering 31 PC(Penalty Corner) chances but managed to convert only three out of these thirty one chances.

Coach Schopman’s stint with team India was making them move two steps forward but also putting them one step back at the same exact time.

They were creating plenty but could only convert a few which showed what they actually lacked in terms of quality and finishing.

Even though the aggression was there to score, these chances went in vain.

India were chasing New Zealand’s lead in the match after this, Katariya and Lalremsiami managed to convert two field goals,Indias designated drag flicker Gurjit Kaur managed to flick one to the bottom right corner sliding past two defenders and the stretched leg of the Kiwi goalkeeper.This goal showcased her real talent and skill but still it could not overshadow the low conversion rate of 1 out of 15.

Lack of Intensity against Spain and England

The Indian PC takers lacked intensity against Spain as they could not manage to convert even one of the PC chances even though they got 4 in total.

Even against England they could not be clinical and were held to a draw against them with a poor conversion rate of 1 out 7 chances.

Even though they had the skill, the lack of intensity and conversion showcased that there’s lot that is supposed to be worked on in terms of their finishing.

These low conversion rates directly cost India a spot in the quarter finals and will be a topic to be worked on with the Commonwealth Games coming up.

Schopman, a gold medalist in the Beijing Olympics will be happy that India are managing to get the ball aggressively into the D and trying incorporate her fancy tricks and tips into taking PCs but will surely be worried when she sees the low rate of conversions despite her wide range of tactics and expertise.

Lot of expectations from Gurjit Kaur

Gurjit is the lady assigned to this big role in team India of taking PCs and carries most of the responsibility,she had previously showcased why she is vital and fit for this exact role against USA at least until the return of Monika Malik.

She has become a sensation due to the rarity of drag flickers in India and will continue to be one.

India is earning a lot more PCs comparatively and this time it is not only from the flank but also aggressively via entering the D and trying to destroy the opponents defense, the speed and aggression is unmatched and its creating a lot of goal scoring opportunities for the India Team.

There are a lot of positives in terms of the progress of the team.

Gurjit Kaur and Deep Grace Ekka have been a formidable pair for India in their set pieces and have done a lot for their country but still they will need defensive upgrades to keep up.

Gurjits methods are getting slightly predictable and she will need to experiment a bit with the way she does things on the field.

India will have to avoid any lapse in the defense and will have to cover up for it as they are already not being able to convert majority of the chances therefore they cannot afford to concede in future games until this issue is fixed.

The Next FIH Pro League

The next FIH Pro league won’t see India as they have failed to stay in the ranking bracket,that means India will have fewer top level matches and will not get enough chances to test out their PC skills.

The CWG will be the last place where India will be able to showcase what they are truly made of and redeem themselves for the lack of games coming in the next season.

The lack of young talents will also be a deciding factor in terms of India’s future in hockey even though it looks very promising due to the Dutch coach that has a lot of experience and talent herself.

“I confirm a thousand times”