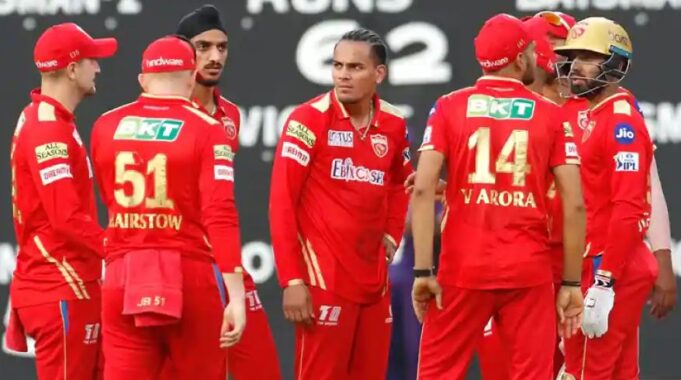 The PBKS team is inching to the top 4 with this win against the CSK team. Ambati Rayudu managed to keep the CSK team in the hunt right till the closing over’s but his 78 from 39 balls did not save the team from 6th defeat out of 8 games. Shikhar Dhawan, on the other hand, managed to score an unbeaten 88 runs from only 59 balls.

In this tournament, the Kings (PBKS) adapted a traditional approach and throttled back and opened with wickets in ‘hand’. At the end of the power play, their score was 37 runs for the loss of 1 wicket. This is considered to be the slowest start. Shikhar Dhawan along with Bhanuka Rajapaksa managed to settle in a ‘steady’ stand, providing foundation to an imposing total.

Though Rajapaksa was dropped two times, he managed to get the first partnership century for the PBKS team. This pair managed to hit 6 boundaries.

That's that from Match 38.@PunjabKingsIPL win by 11 runs.

Shikhar moved into the 60’s with ‘back-to-back’ boundaries in the 16th over off Dwaine Bravo. His approach managed to set the template for his team. For the 1st half of the innings he stuck to ‘a run a ball’. His only boundaries till then were a 6 against Maheesh Theekshana and a 4 against Dwaine Pretorius. The PBKS team was on course with the 50 off 37 balls. Rahapaksa fell in the eighteenth over and the strike was handed over to Liam Livingstone.

Lack of powerplay by the CSK team

Throughout the season the CSK team has faced problems in getting off to a ‘good’ start. Once again this team managed to ship early wickets when chasing. Mitchell Santner was asked to go at No. 3 but he seemed to struggle to 9 runs in 15 balls. 4 of these runs came from the outside edge. He fell in the 6th over when Arshdeep Singh got his leg stump. This meant the batting average of the CSK team had dipped. In the over that followed their position only got worse.

Rayudu and the chase

The CSK team, in the 13th over, was on 89 runs for the loss of 4 wickets after the dismissal of Ruturaj Gaikwad. They seemed to be well out of contention. Rayudu managed to unleash some clean hitting, nearing his 1st fifty of this season. He had launched the ball into the stands 6 times, out of which 3 were in a row. This brought the CSK team within the range. The asking rate was 47 off the last 4. Arshdeep managed to bowl a good over with wide Yorkers. This cost only 6 runs. Rayudu was dismissed by Rabada and the game seemed to be over as too much had to be done. This was not possible even by Dhoni.