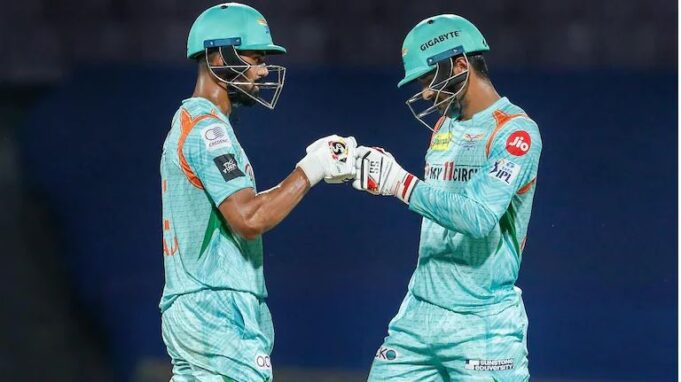 The LSG team completed a win over the SRH team with 12 runs. The LSG team was reduced to 27 for 3 after they were sent in. They soon recovered and set a target of 170 runs for the competitors. The SRH team accepted this challenge and Rahul Tripathi along with Nicholas Pooran answered with quick fire knocks.

Washington Sundar did not open the bowling in the match against the Rajasthan Royals, but did so against the LSG team. He managed to make a big impact and surpassed the expectations of the SRH team. De Kock was dismissed as he did not get enough room to hit the ‘inside-out’ and Evin Lewis, a left-hander, who tried sweeping every ball.

The hard lengths of Romario Shephard took out Pandey. The LSG team finished the power play with 32 for the loss of 3.

Hooda adapted a totally different approach and punished Umran Malik with 3 four’s and a six. Though Umran bowled well, Hooda managed some exceptional shots on his bowling.

Rahul, also, hit 2 fours off the bowling of Malik and in his 2nd and 3rd over’s, the tenth and the fourteenth of the LSG, went for a 36 combined. The recovery of the LSG seemed to be on track even though the other bowlers of the SRH team did a good job.

The SRH started the chase well with 21 runs for no loss after 3 over’s. Avesh managed to get Williamson out just when he seemed to be getting ‘dangerous’. In his next over, Avesh also got Abhishek Sharma out.

Rahul Tripathi clattered to a 44 off 30 balls that included 3 fours in the 8th over by Andrew Tye. Krunal managed to get him and also Aiden Markam out, leaving SRH team needing almost 75 runs off 41 balls.

Pooran was not only slow but also not very convincing.  Ravi Bishnoi managed a leg-side 6 off Krunal in the fourteenth over. He also hit Holder for 2 fours in the fifteenth over.

Tye changed his pace and conceded a mere 8 runs in the seventeenth over. The SRH team now needed 33 runs from 18 balls. After hitting a 6 off Avesh, Pooran got out.

Delivering another blow to the chances of the SRH team, Avesh nicked off Abdul Samad.

The nineteenth over bowled by Tye can be considered superb. At this time, the SRH team seemed to be slipping out of the competition but Shepherd hit a 6 and they were back.

Getting 16 runs from the last over was difficult but not impossible. Washington was caught on the boundary when he tried hitting a 6.

There were 2 singled made and Bhuvaneshwar holed out. They now needed 2 sixes to tie the game and this ended the match.

“We utterly failed to show up”

Zach Wilson or Gardner Minshew? Fantasy outlooks for the Jets and Eagles QBs in...

“Sometimes, we just pay attention to the three-figure mark”