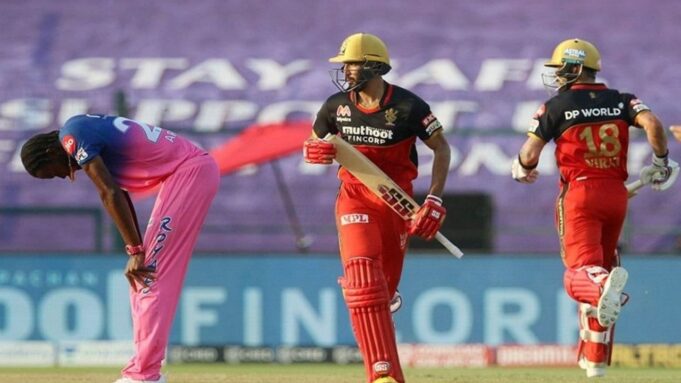 In a chase of 170, the partnership between Shahbaz Ahmed and Dinesh Karthik dragged the RCB team back to life from a meager score of 87 for 5. The RR team had to defend a total considered ‘modest’. This started off well with the new recruits. The standout bowler for the evening was Yuzvendra Chahal who took 2 wickets and conceded only 15 runs. He played an important role in getting Virat Kohli out. Anuj Rawat was, on the other hand, dismissed by Navdeep Saini.

It was the wicket of Rutherford that brought Shahbaz( 45 runs in 26 balls) and Karthik (44runs in 23 balls) together. They smacked a score of 67 runs in only 5.2 over’s. Shahbaz pulled Trent Boult and Saini for 6’s at the back-end, while Karthik punished Ashwin .

With a positive start from Rawat and Faf du Plessis, the RCB team started off well. Sanju Samson turned to Chahal after the power play. In his first over, he bowled ‘leg-breaks’ that landed on the middle stump of du Plessis. Saini trapped Rawat with a slower ball.

Kohli had to walk back at 5 due to miscommunication with David Wiley. In the next ball, Willey seemed to be fooled by the legbreak of Chahal and was bowled. The RCB team had slipped to 62 for 4 in only 12 balls.

The hammering of Karthik managed to raise the hopes of the RCB team. He also took a toll on Saini with 3 boundaries and finally left the stage to Shahbaz.

After Shahbaz had taken a back seat with 16 runs in 14 balls, he decided to move. He took a 6 and also a 4 off Prasidh Krishna and also Boult. At the time he got dismissed, the match was practically over.

Karthik has not been dismissed in IPL till now and this proves how dangerous he can be.

When the RR team was asked to bat first, it took some ‘scrappy’ innings from Jos Buttler, some big hits from Hetmeyer and few ‘counter-punches’ from Shimron to get 169 runs.

Padikkal, in 29 balls, 37 runs, had hit 2 fours and 2 sixes after Yashavi Jaiswal was dismissed by Willey.

The four over’s of Wanindu Hasaranga were most googlies. This also managed to get the wicket of Sampson. Harshal and Hasaranga managed to keep a ‘chokehold’ on the batters. It took 7 balls for Hetmeyer to get off the mark. The Royals had managed only 107 by the 16th over.

Finally, it was the slog-over’s and Hetmeyer managed to punish Mohammed Siraj and also Harshal in the seventeenth and eighteenth overs.

Akash Deep conceded 3 sixes in the 20th over.

“He has never orchestrated the tempo of a game” – Carragher explains why not...