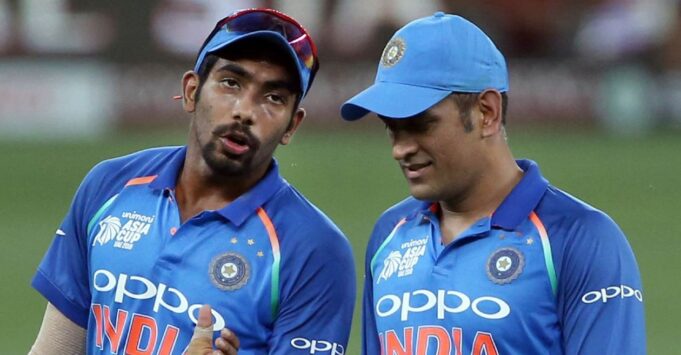 India vs England 5th Test: Bumrah says he is drawing inspiration from M.S. Dhoni before his Debut as the Test Captain for the 5th Test.

Bumrah is breaking the dry streak of captaincy for Indian pacers by becoming the first pacer after 35 years to lead the Indian Team.

Bumrah feels as if this is the biggest achievement of his career as he gets to lead the Indian Team in a crucial game against England and is said to be taking inspiration from M.S. Dhoni who also captained the Indian cricket team in the past without any prior captaincy experience and managed to be extremely successful.

Bumrah hopes he can achieve success in this role too and come out on top in this final test.

Bumrah got to know about his captaincy on Thursday just one day before the game after Rohit Sharma the current captain of team India was ruled out due to testing Positive for Covid-19.

Taking down on-form England is a challenge and it seems like Bumrah is completely prepared for it.

“The taste of success feels good when there is a lot of pressure. I am always up for the responsibilities and I love to be in tough challenges. As a cricketer, you always want to test yourself in deep waters. I have spoken to many cricketers. Everybody improves and keeps getting better” he said on the eve of the game.

“I remember speaking to MS(Dhoni), and he told me that he never captained any side before he led India for the first time. Now, he is remembered as one of the most successful captains of all time.”

“So, I am focusing on how I can help the team and not focusing on what I have done before or how the cricketing convention or the rules have been set”.

Like it is mentioned earlier, it is extremely rare for an Indian Pacer to lead the Indian Cricket side but there’s no doubt that Bumrah’s achievements and experience are any less for such a big role in the Indian team.

“Representing India in Tests was always a dream for me and this opportunity to lead the side is the biggest achievement of my career. I’m very happy that I’ve been given this opportunity. I have had immense faith in myself.”

“In every scenario, I have trusted my instincts that have taken me to this level in cricket and I will keep doing, going forward. Nothing changes for me, especially my role. That’s what I am going to do as the captain of the side.”

“We are completely focused on the game and we are fully prepared, given we already played a practice match against Leicestershire, where the wicket was a bit different from this one.”

He already has had conversations with Virat Kohli and Rohit Sharma and has taken experience and tips from the former and current captains of Team India.

“Their roles have been very important. Virat’s inputs will be crucial when I am bowling or making changes. Virat’s suggestions are going to be invaluable and always important for us.” said Bumrah.

“I had a look at the wicket and had discussions with our coach and have a fair idea on how this wicket might behave. We have decided on the openers against England as well but won’t reveal anything now.

“Rohit is a very important player and we will miss him in this game. It’s unfortunate that someone like Rohit is missing out,” he said.

Pooja Vastrakar: India get a squad boost just before the must win clash against Barbados in the CWG22

Pooja Vastrakar: India get a squad boost just before the must win clash against...