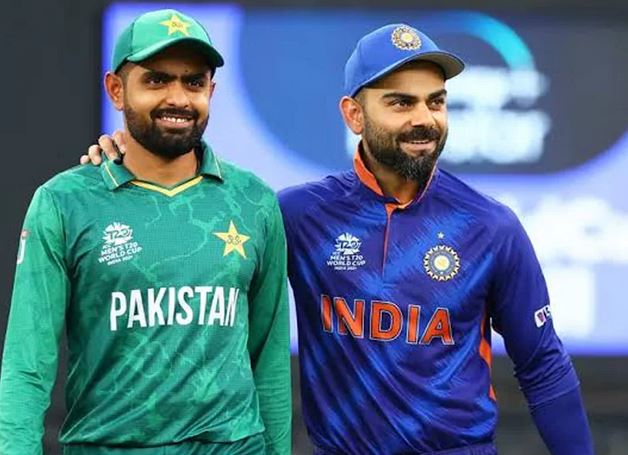 After Virat Kohli did not manage to make a mark once again against the England squad, Babar had some words of motivation for him which he expressed by tweeting on his official twitter handle.

The tweet was “This too shall pass. #ViratKohli” with a picture of him and Virat Kohli smiling together.

Babar knows that these are tough times for the former Indian skipper who has almost never failed to score runs and perform to his maximum potential therefore Babar who has high regards for Virat Kohli and is often compared with him too wanted to show how much he respects him.

Virat Kohli and Babar Azam’s current forms are quite contrasting to each other.The former Indian captain is going through the leanest phase of his career and even though his average has not been bad it has not been upto the mark compared to what he’s delivered in the past, having being the best batsmen in the ICC rankings for a couple of years now this is very unlike Kohli whereas the Pakistani skipper Babar Azam is having a great run and has been delivering consistent performances for quite sometime now. There have been a lot of comparisons between the two nevertheless the camaraderie between the two has not diminished at all.

Babar Azam’s rise in Pakistan and on the world stage has been quite exciting and steady for the last couple of years, his consistency has been top notch and he has been proving his worth constantly.

He had emerged as an exciting talent for Pakistan and after a couple of stellar performances he soon started getting counted as one of the best in the world which slowly helped him gain captaincy of the Pakistan national team as well. Leading your country is not as easy task along with being the star batsmen and pillar of the lineup and can only be done by a few who are extremely capable of handling such pressure constantly.

Many former cricketers have argued that he is the best batter in the world right now according to his figures and form,whereas others have spoken about including him the elite batsmen list and expanding it from a top 4 to a top 5 which will consist of Virat Kohli, Joe Root, Kane Williamson, Steve Smith and now Babar Azam.

His form in limited overs cricket has been exceptional and continues to dominate the T20 ICC rankings.As per the latest rankings Babar has maintained the top spot and as a result has broken a record that was previously set by the former Indian Captain, Virat Kohli. Babar has been at the top of the T20i rankings for the longest time now surpassing Kohli’s previous record of 1013 days.

Babar recently managed to break another one of Virat Kohli’s records where he scored over 1000 runs in ODIs since taking over the captaincy of Pakistan, he did this by scoring over 1000 runs in 13 ODIs, the record was previously held by Kohli who took 17 ODIs to achieve this feat.

Who is Allison Holker? All about DJ Stephen Twitch Boss’ wife and kids amid...

“Many clubs are keen on signing him”