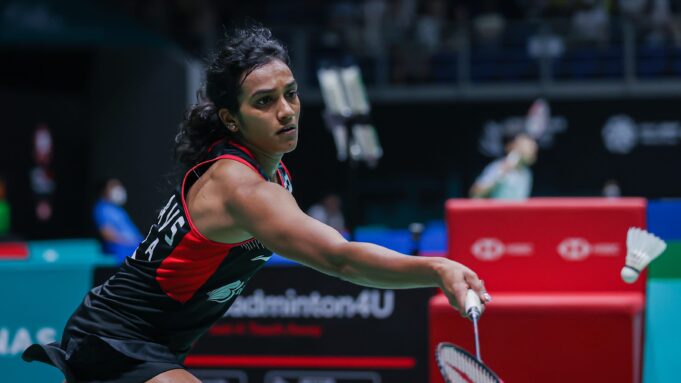 The title clash was mistake filled but Sidhu managed to stay strong in the key and important moments thus granting her victory. She faced off against the young 22 year old Chinese Wang Zhi HI who is the reigning Asian Championship gold medalist thus making her the number one Asian player in recent times. It was not an easy match for PV Sindhu and the scoreline ended 21-9. 11-21 and 21-15 in PV’s favour making her the champion for this tournament.

The 27 year old player from Hyderabad came into this fixture with a positive record of 1-0 against the reigning Asian champion Wang Zi hi,they previously met in England at the All England Championships in 2022.

The Prime Minister of India Mr Narendra Modi even tweeted out congratulating the 27 year old veteran who has proved her mettle for India multiple times.

This fine display of performances at the Singapore Open Super 500 helped her grab her third world tour title this season.

Even though the winner was PV Sindhu the toss of the game played a crucial role too./, there was a drift in the hall which made it hell for the shutlers and therefore winning the toss and choosing the right decision was extremely important for either of them to win. Wang won this toss and her decision to choose side helped her play against the drift in the final match of the series although the toss and playing against the drift was not enough.

PV Sindhu managed to keep errors in limit and keep her nerves to emerge victorious in this match up.

Sindhu lost the first two points but then she used her reach to get to the shuttle early, played some amazing angled returns producing one winner after another to stay ahead in the opening game of the finals.

Even though she played against the drift it did not restrict her from playing her shots even though Wang was hitting wide and long, Sidhu gathered 11 points on the trot which helped her zoom to 11-2 in the mid game interval of the first game against Wang.

She maintained her grip over the game and after the resumption swiftly lead herself to victory in the first game.

The 2nd game however turned into something that would be unforgettable for Sindhu as Wang was on the better side of the net and could finally showcase her prowess.

The Chinese was soon 11-3 up and Sindhu could not manage to return her shots efficiently,all the returns went long and therefore Wang was able to get a monstrous lead of Sindhu in the 2nd game.

Sindhu tried to overturn the game by using spinning net shots and utilize the gaps on the court but the points were few as Wang continued to storm through the 2nd game.

At 8-15 Sindhu could not manage to return properly with her opponent on the floor and in the end a jump smash helped Wang secure a 10 point victory making it even and giving her a shot at the title.

The match had some real passion and fight in the final game of the finals where the duo engaged in some really engaging and exciting rallies that went on for a long time.

Wang seemed charged up in the starting and the score was tied 5-5 but Sindhu was being patient, she soon played a superb smash and ended the rally with a breathtaking drop shot to win the point and gain the momentum.

Sindhu grabbed a 5 point advantage by the interval but soon due to a lot of errors Wang managed to make it 11-12.

However the Indian managed to gain a four point lead by winning continuous points along with unplayable smashes that made the score 18-14,with victory being a few points away it seemed impossible for Wang to make a comeback and that is exactly what happened,with an unleashing smash Sindhu grabbed 5 match points and therefore this is what led to her victory.

This title run in this season will be a huge boost for Sindhu who will be leading India in the Commonwealth games with the aim to continue her form and secure a medal for her country.

This is the third title for the season for PV Sindhu and her form continues in exhilarating fashion.