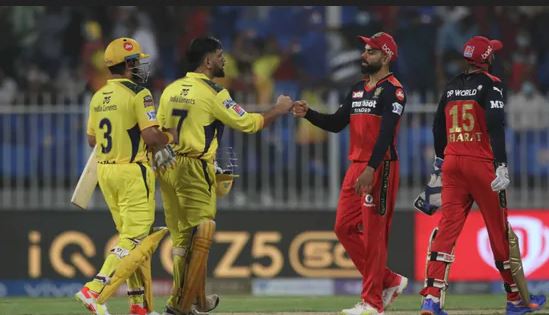 The RCB team managed to put an end to the ‘runs’ of 3 defeats consecutively due to the ‘scrappy’ win against the Chennai Super Kings(CSK).

The CSK team needed only 56 runs off 30 balls at the time the timeout was taken. They seem to lose their way when 3 players were dismissed at 25. In the final over, Harshal was hit for 2 sixes, but dismissing Ravindra Jadeja and Moeen Ali, had already sealed the win.

Both of these players seem to struggle with the spin and the ‘bad’ luck of Kohli seemed to continue.

Theekshana’s last 2 over’s were held back by Dhoni for the 17th and the 19th as he was well aware of the strength of Karthik against pace and weakness against the spin. He conceded 8 runs, of which 6 were scored by Karthik. In his final over, he managed to strike 3 times and removed Wanindu Hasaranga, Lomror and also Shahbaz Ahmed.

Lomror had hit a 4 and a 6 against Pretorius. Karthik took the RCB team to 173 runs by whacking twice to the midwicket.

Devon Conway’s return was marked with 85 runs and not out against the SRH team on Sunday. On Wednesday he managed to make ‘back-to-back’ 50 with a smooth 56. In the 1st over of the chase he managed to sweep Shahbaz for 4’s and also put 51 runs along with Ruturaj Gaikwad.

Harshal was held back by du Plessis till the 13th over. He made sure that he would manage the ball 3 of the last 5. Hasaranga was given the ball in the 15th over. In his 1st 2 over’s he turned out to be expensive as had conceded 3 sixes. This gamble of du Plessis seemed to pay off.

Moeen seemed to have found his rhythm and he managed to loft the final ball of Hasaranga for a 6. Harshal managed to get Jadeja by his variations. Kohli caught Jadeja.

Hazelwood, on the other hand, managed to get Dhoni caught in the 1st ball of the 19th over. His 4 over’s worked out to be crucial as at this time the game was considered to be over.  With the hard length bowling Pretorius can be considered to be a ‘success’.

How to Maintain Healthy Eyes?