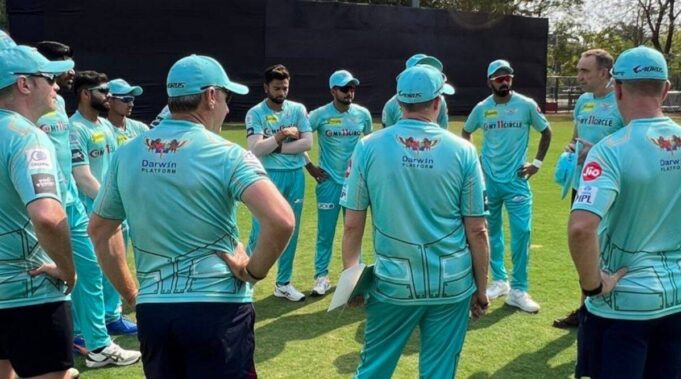 The PBKs team managed a good start to the chase; they reached 46 runs for the loss of 1 in the powerplay. They required 108 runs from 14 over’s with 9 wickets in hand.

Unfortunately, they had to take risks and Liam Livingstone, Jonny Bairstow and Rishi Dhawan could hit, but they seemed to struggle for the required fluency and the PBKS team landed short of 20 runs.

The 153 runs of the LSG team were due to the 85 runs stand between Deepak Hooda and Quinton de Kock, for the 2nd wicket. This was the ‘sole’ partnership of more than 35 runs in the match. They seemed to collapse through the ‘middle’ over’s losing 5 wickets for only 13 runs. The ‘late’ blows from Mohsin Khan and Dushmantha Chameera ensured that they finish with a total considered ‘defendable’.

Krunal has been required to bowl only when the conditions seem suitable. In the final ball of his 1st over, he managed to dismiss the only left-handed batter of the PBKS team, Bhanuka Rajapaksa.

In his final 3 over’s he conceded only 4 runs and trapped Jitesh Sharma for a lbw. When the bowling spell of Krunal was over, the PBKS team needed 62 runs off 36 balls with 5 wickets left.

The LSG team seemed to be uncomfortable adjusting to the pitch. Kagiso Rabada induced an ‘outside edge’ from Rahul. He fell for 6. The LSG team could manage 39 from the powerplay.

Hooda struggled to make 3 runs from 12 balls, but the 6’s from Livingstone and Rishi Dhawan got things to move.

Marcus Stoinis was caught by Rahul Chahar and Jason Holder was taken at ‘deep extra cover’.

Both, Chameera and Mohsin hit ‘crucial’ 6’s at death, dragging the LSG team to 153 runs.

Mohsin Khan bowled slow balls through the ‘middle’ and in the powerplay he paced the balls well. This has made him an exciting prospect for future games.

In the 1st ball of his 3rd over, he managed to take the ‘key’ wicket of Livingstone. He gave him no pace with which he could work. He was shuffling to play a ‘premeditated’ scoop. The 2 tail-end wickets in his 4th finishing with 3 wickets for 24 runs, iced the victory of the LSG team.

Sri Lanka roar as they win against Bangladesh and All rounder Karunaratne celebrates the...