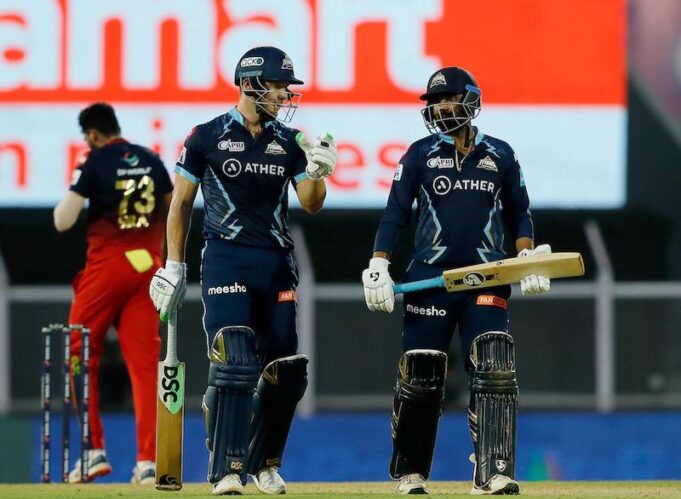 The Gujarat Titans beat the Royal Challengers Bangalore and won their eighth out of nine games played yesterday. The Challengers won the toss and chose to bat at the Brabourne stadium. With a total of 170 for 6 wickets, they gave the titans a modest total to chase, something the Titans accomplished easily and won by six wickets with a score of 174 for 4.

Rahul Tewatia and David Miller helped the Titans to another victory, leading to the Titans showing the best-ever start in an IPL season. The Titans were 95 for 4 when an unbroken 79-run partnership between the two aided in a third consecutive defeat for the Challengers. The power-duo hit three sixes and nine fours during their 40-ball partnership. After a half-century partnership between Wriddhiman Saha and Shubman Gill, the top-order crumbled under an attack by Wanindu Hasaranga and Shahbaz Ahmed. It was then that Miller and Tewatia got into action, punishing Mohammed Siraj and Josh Hazlewood in the process. The Titans won the game with three balls to spare.

Crucial wickets taken by Pradeep Sangwan and Rashid Khan ensured that the Titans were left with a modest total to chase. Du Plessis opted to open the Challengers’ innings but couldn’t follow through when he lost his wicket in the second over. In came Patidar, who supported Kohli when the two scored three boundaries in the fourth over. The two batters kept taking ones and twos, after which Patidar hit Rashid Khan for a six, followed by a 15-run haul in the next over. Kohli and Patidar scored their fifties in consecutive overs soon after.

After 14 overs, the Challengers were 110 for 1 wicket when Patidar mis-played a shot and gave Sangwan his second wicket. Kohli followed when he was out to a slower ball from Shami in over number 17. This followed by a consistent loss of wickets, slowing down the Challengers during a crucial period. A few late shots from Maxwell and Lomror took the Challengers to a total of 170 for 6 wickets.

The target for the Titans, though modest, was a bit tricky since the IPL grounds are now showing signs of wearing out. The Titans reached their 50 at around 7 overs, with Gill scoring 19. In came Hasaranga, who dismissed Wriddhiman Saha with a googly for 29. Gill followed with an lbw and Sudharshan and Hardik Pandya followed soon after, leaving the Titans at 96 for 4. In came Tewatia and Miller, who turned the tide for the flailing Titans. After almost losing his wicket on the second ball of his innings, Tewatia hit two fours and leg-byes. Miller, on the other end, hit Hasaranga for a six and a four. When they needed 36 off three overs, Hazlewood was brought back, but that did not work. Miller ended over number 18 with 17 runs off it. This followed by the 19th over by Harshal Patel, which gave the Titans 12 runs. The final over had the Titans needing 7 runs, which the batters scored easily with a boundary each, leading them to an easy victory.