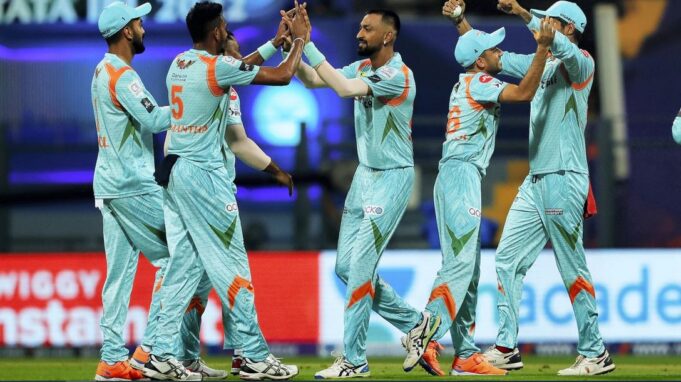 Quinton de Kock and KL Rahul, with an opening stand of 99, set the platform. Ayush Badoni managed a cameo towards the end and Evin Lewis smashed 55 off 23 balls.

Earlier, Robin Uthappa struck a 50 with 27 balls; this included a 6 and eight 4’s. Shivam Dube, on the other hand, made 49 off only 30 balls. This helped the Super Kings with 210 for 7. This can be considered as ‘formidable’.

The CSK team was well aware of the fact that this score was not at all challenging or a winning total. The umpires had to change the ball in innings, the dewy conditions and absence of Adam Milne, all added up to their doubts.

The LSG team needed 34 from the final two over’s. Dube was given the ball by Ravindra Jadeja . He had not bowled till then and this showed with Badoni hitting a 6. There were 2 wide deliveries after this and the last 3 were apt for Lewis, as he smashed these for a 4, 4 and a 6.

In the final over there 9 runs needed. Mukesh Choudhary bowled 2 wides. After 2 balls, Badoni hit the ‘winning’ run and gave the LSG team their first win.

Dhoni and the Final Touch

When the CSK team was 189 for the loss of 4 in 18.2 over’s MS Dhoni headed to the crease. He forehanded Avesh for a 6 . This was the ‘first’ time he had hit a 6 in the first ball in an IPL match. The next ball was a 4 of ‘one-bounce’. Dwaine and Jadeja were dismissed by Tye with successive balls but Dhoni finished off the innings with another 4.

De kock and Rahul gave the LSG team the much needed quick start. In the first 5 over’s they managed to hit eight 4’s and two 6’s.

De Kock almost got out but the straightforward catch was dropped by Moeen. In the next 3 over’s three 4’s and two 6’s were made. Halfway through, Rahul was on 40 off 35 balls and de Kock was on 51 off 35 balls.

The opening stand ended with Pretorius dismissing Rahul with Rayudu taking the catch. Soon after, the wicket of Manish Pandey was taken. From the last 8 over’s, the LSG team needed 97 runs.

Lewis managed to hit Deshpande for a 4 and a 6. This helped keeping the asking rate well under control. At this time, Pretorius struck.

Hooda and Lewis managed to keep the chase alive. In the 16th over, both made a boundary each against the bowling of Dwayne Bravo. In the 17th over, Pretorius gave away only 9 runs. The penultimate of 25 runs over by Dubey got the LSG team their win.