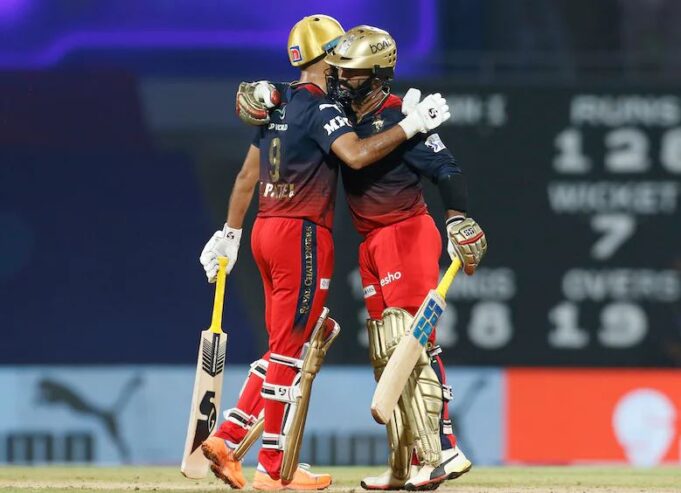 The RCB team with 132 for the loss of 7 wickets beat the KKR team by 3 wickets.

As known, the RCB team had lost the season’s opening game and was, in danger of repeating this again against the KKR team. This was, in spite of them bowling out the opposite team for 128. They managed to pull through with a tough fight against the KKR team bowlers, though this DIY Patil Stadium pitch had a variable bounce.

Andre Russell bowled with an injured shoulder and could not hold back Dinesh Kartik, who struck the winning blows.

When the KKR team was sent in, they were well aware of the advantage of what the dew has offered the chasing teams. This strategy could have worked ‘positive’ on any other day, but on this day it seemed to have backfired. They were all bowled out for a score of 128 runs with 7 balls being unused.

RCB played this match with 4 fast bowlers that is due to the fact that they had managed to read the surface well enough. The bouncer of Akash Deep managed 2 early incisions with bouncer. That was it for Nitish Rana and Venkatesh Iyer. Mohammed Siraj managed to get Ajinkya Rahane out with a catch with a short ball. The KKR team made 44 runs for 3 wickets in the powerplay.

Sunil Narine was promoted in the batting line by the KKR team. He flat-batted Akash for a .much-needed’ 4 down the ground and also hit a 6 over the head of the keeper. He was dismissed by Hasaranga soon after.

Russell was removed by Harshal in the 14th, but only after he had hit Shahbaz for a couple of 6’s.

Southee and Umesh in ‘Test-match’ mode

In the 2nd ball of the innings of the RCB, Umesh found the edge of Anuj Rawat. Virat Kohli stroked the first 2 balls faced for well timed boundaries. In the next over, Umesh managed his revenge and got one to nip away from Virat Kohli.

The dismissal of Shahbaz and the entry of Kartik brought Narine into the attack. RCB was extra careful in playing this over and took only 4 singles off this over. They needed 24 runs off 18 balls and were quite comfortable with this. KKR then made a drastic change in the bowling and brought Southee in the 18th over. He managed to turn the match and picked up 2 wickets in the 18th over.

After a certain span of time and tense cricket, they needed 7 from the last over. Russell took over with the injury. Karthik saw the short-ball early enough to hit this for a boundary.