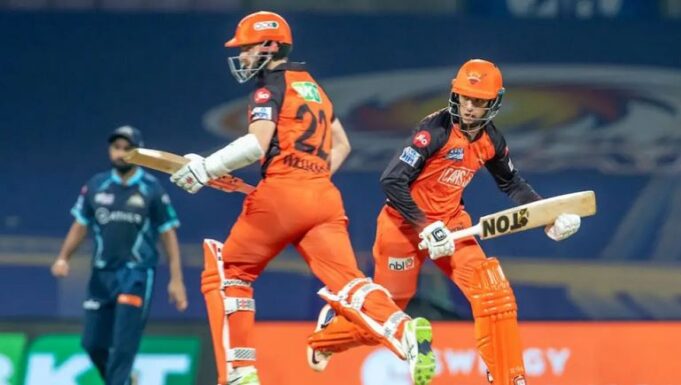 Abhishek Sharma managed to carve up Rashid Khan, while Umran Malik did the same with Hardik Pandya. The new generation took up the old generation and this is what made this match ‘breathtaking’.

Abhishek seemed to be on fire with Rashid’s bowling. This 21 year old seemed to be pwning a master of modern day. The night ended for Rashid with figures like 4 – 0 – 45- 0. 34 runs were made by Abhishek. It seemed that the GT team had done their ‘homework’ well. Rashid coming in to bowl was a plan by the SRH but Abhishek at the other end, it failed. His style of batting proved that Rashid’s style of bowling was no mystery to this lad.

Shashank Singh is a big hitter and needed a stage to show this. This IPL2022 against the SRH team seemed to be the stage he was looking for.

Lockie Ferguson came to bowl the 20th over and Shashank managed to thump him for 6, 6, and another 6. After which, the mind games started.

Shashank was waiting for the bouncer that was expected, another 6 over the mid-wicket. It is known that a ‘fast’ bowler who leaks runs in the ‘last’ over will go back to the basics. Shashank was all ready for this too. The Yorker turned into full toss, but this was, too, hit for a 6.

Saha was, single-handedly, leading a team with a top three that are flawed, into the winning position. Malik came and managed to break the stumps of the opening partner. The score was 69 for 1, and then, 122 for the loss of 3, and 139 for the loss of 4 with David Miller’s wicket. Finally, it was the wicket of Abhinav Manohar, making the score 140 for the loss of 5 wickets.

Even the best batters are unable the handle the bowling of Malik as he seems to shoot a cannon at a very high speed.

Manohar was out due to a ball that seemed to be off the pitch.

Tewatia was all wound up as the GT team was given only a 12% chance of winning this game. In the 17th over, he managed to send one of the best ‘death’ bowlers of the season for 12 runs. This miracle worker smashed the Yorker of T. Natarajan for a 6.

Marco Jansen’s 1st ball was hit for 6 by Tewatia and this lowered the asking rate. Jansen had made up his mind to not let the GT win this game when they needed 9 off the last 2 balls.

When the GT team needed 3 off 1 ball, Jansen went for a slow bouncer. Rashid hooked this on instinct and Natarajan was waiting for the ‘obvious’ catch. The ball managed to beat the fielder and the game was over.