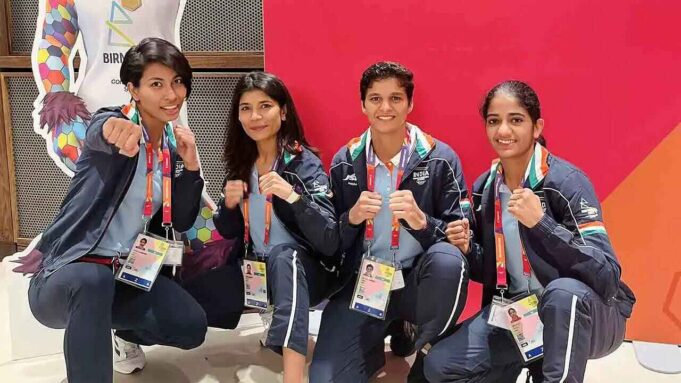 In the absence of Neeraj Chopra and the shooters, India’s medal tally pressure will all be on the boxing contingent, wrestlers, weightlifters and hockey teams.

The United Kingdom is finally off the hook from the heatwave, last week the United Kingdom witnessed 40 degrees but luckily the rain gods have blessed the turf and the temperature has been normalized.

This comes as a good news for the international athletes as they are not used to such tropical harsh conditions, the increase in temperature was kind of an advantage for the Indian contingent but now it’s back to square one.

It is not the biggest setback but when you look at it in terms of Neeraj Chopra who has been monumental in achieving glory for India and shooting not being in the CWG programme this, but this will surely be affecting the medal tally for the Indians.

Neeraj Chopra was supposed to be the flag bearer in the opening ceremony but due to his absence he won’t be able to do so, the flag bearing duties will be taken over by the great double olympic medalist PV Sindhu.

India’s record in the CWG has been extremely good for the most part, they had their second best haul in 2018 where they bagged 26 gold, 20 silver and 20 bronze medals.

This tally seems like a long shot for the current 2022 Commonwealth games due to shooting not being a part of it.

Hence, a humble top 5 finish would be something that the Indian contingent should be aiming for, India has managed to achieve a top 5 finish consistently since 2002 although this is also not assured due to the rising ranks and domination of nations like Australia and New Zealand.

Seema Punia the discus thrower, Annu Rani the javelin thrower, long jumper Sreeshankar, triple jumper Eldhose Paul and 100M hurdler Jyoti Yarraji will be in the spotlight in the athletics department and will be looking for a podium finish.

You can expect a gold rush coming in from the wrestlers, the federation is expecting all 12 wrestlers to secure a medal and an added bonus is that the world’s best wrestlers don’t compete at the CWG so it can be a cakewalk for the Indians.

The Indian shuttlers PV Sindhu, Lakshya Sen, Kidambi Srikanth and the men’s double pair of Satwiksairaj Reddy and Chirag Shetty are expected to secure medals in the Commonwealth games. The boxers are also expected to seek glory in the CWG and people have high hopes from them.

The Indian hockey team experienced its biggest high in the recent Tokyo Olympics, the men’s team won a memorable bronze and the Women’s team reached the Semi Finals for the first time in the Olympics.

Glory is expected from the table tennis contingent and the wrestling contingent as well, even though India are missing their dominating medal achievers still they have a fair chance at achieving great things in the CWG.

PointsBet Promo Code: Get Two Risk-Free Bets up to $2,000 on Thursday Night Football