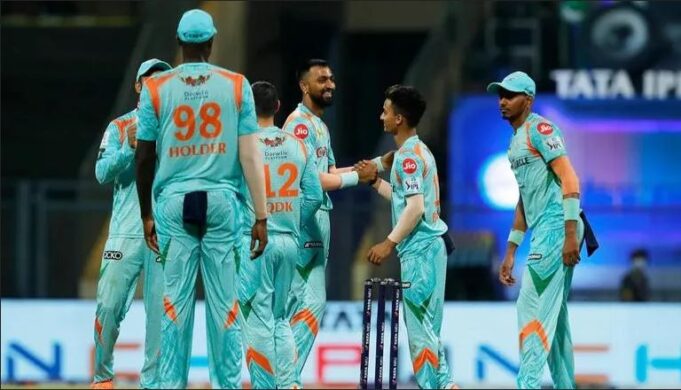 Lucknow Super Giants scored a mighty 210 runs for no loss and beat the Kolkata Knight Riders who just fell short and scored 208 at the loss of 8 wickets at the D Y Patil stadium last evening. Before leading the Super Giants to the playoffs, victory seemed just a bit elusive when Rinku and Narine hit sixes and caused havoc in the match. However, the sixes ended up futile as the Knight Riders lost the match after almost touching the heels of victory.

While the Super Giants reached their impressive total without the loss of a single wicket, the Knight Riders weren’t so lucky. The first three overs of their innings saw them losing two wickets. When Rinku came in to bat, victory seemed a bit more tangible, but that’s the wonder that is T20. Stoinis picked up two wickets in two balls, with one being a spectacular catch by Evin Lewis.

Quinton de Kock annihilated the Knight Riders’ spinners with a massive strike rate of 183. And he owed it all to his sheer talent with the sweep and pull shots that he could manage to sow the seeds of doubt in the minds of these talented spinners.

After he retired from the test format, it seems that the test cricket’s loss has proved to be T20 franchise’s gain. He showed off his batting skills and scored 42 runs off 15 balls against KKR’s Andre Russel. de Kock seemed unstoppable last night and scored his highest IPL score, set an IPL record for highest opening partnership, and led KKR to becoming only the fourth team to complete its overs without losing a single wicket. Rahul too wasn’t to be left behind when he scored his 68 runs and completed 500 runs in a season.

Mohsin Khan proved his mettle when he picked up two wickets early on in the innings. After 12 overs, the Knight Riders were 125 for three wickets. Nitish Rana had already scored 42 off 22 and Shreyas Iyer and Sam Billings were looking ready for the kill. Rahul then took the decision to change the bowling, leading to a 13th over that cost him just 2 runs where the previous three had cost him 46. When Rahul brought in Stoinis, Shreyas tried to go for a bit shot but was caught on the boundary.

After the Knight Riders lost Russel to a slower ball from Mohsin, they needed 61 runs from 20 balls and it seemed like their chances of victory were slim. Rinku and Narine, both left-handed batters, scored a massive 40 runs from 14 deliveries, all thanks to length balls and yorkers becoming full tosses. Even though it seemed like Rinku was leading the Riders to a sweet victory, they fell short at the last moment. With three needed from the last ball, Umesh Yadav was bowled out, leading the Super Giants to a spectacular victory.

“Great pick up”, “Mark Prior use your magic”