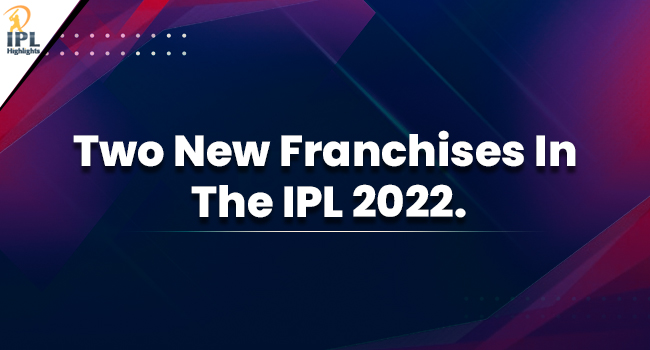 BCCI is planning to add two new franchises in the IPL 2022.

The IPL 2022 season will have 10 teams, according to TOI, the board has devised a blueprint for the upcoming Indian Premier League (IPL) season, which will take place in 2022. The BCCI has planned to establish new franchises, increase the pay budget for teams, retain players, hold a major IPL auction, and other initiatives.

In mid-August, the BCCI will issue tenders for two more IPL franchises. The bidding process will begin in mid-October if all protocols are followed. The RP-Sanjiv Goenka Group of Kolkata (who formerly owned the Rising Pune Supergiant), the Adani Group of Ahmedabad, and the Torrent Group of Gujarat have all expressed interest, according to TOI.

BCCI to enhance the salary purse for all the franchises ahead of IPL 2022:

The BCCI will also enhance the salary purse for all franchises from INR 85 to INR 90 crores, resulting in a total pool increase of INR 50 crores among the 10 franchisees. The teams must spend at least 75% of the total prize pool.

Every team is allowed to keep four players under the player retention policy. However, there should be either three Indians and one overseas player retained, or two Indians and two foreign players retained.

According to the Times of India, each franchise can keep four players ahead of the 2022 bidding event. However, a team can keep either three Indians and one abroad player or two Indians and as many international stars as they like.

The gala tournament for the 2021 competition was slated to take place in April-May. The widely spread COVID-19 infection, however, caused BCCI to call a halt to the competition on May 4th. The remaining matches will now be held in September and October in the United Arab Emirates. However, many clubs may struggle because some overseas stars are anticipated to withdraw from the tournament, which will be followed by the T20 World Cup, which will begin just days after the IPL concludes.

Meanwhile, the Rishabh Pant-led Delhi Capitals were dominating the team rankings with six wins in eight games at the time of the season suspension. Royal Challengers Bangalore and Chennai Super Kings each won five of their seven games while reigning champions MI won four of their seven. These four teams are the front-runners for a playoff spot, and it will be interesting to see if anything unexpected happens.

Three states are in the running to host new IPL teams in the 2022 season.

Gujarat is the frontrunner to launch a new IPL team in 2021, and they appear to be a strong contender again in 2022.

Gujarat not only houses India’s current political elite but also houses the world’s largest cricket stadium. The Gujarat Lions, an interim franchise that stepped in during the Chennai Super Kings and Rajasthan Royals’ two-year bans from the league, represented Gujarat in the IPL in 2016 and 2017.

A franchise situated in Gujarat would appeal to a large fan base and a state with a long cricketing history.

Uttar Pradesh (UP), the home state of previous and present Team India stars such as Mohammad Kaif, RP Singh, Suresh Raina, Bhuvneshwar Kumar, and Kuldeep Yadav, has India’s greatest population. In various formats, emerging IPL talents like Shivam Mavi and Priyam Garg are also part of the current UP squad.

The domestic team’s home games are held at Kanpur’s Green Park Stadium, and the IPL team’s home base may be the same. A club from Uttar Pradesh would be certain to have a large fan base, which may help a squad that has been underwhelming in domestic cricket for a long time.

Kerala is the only southern state (aside from Andhra Pradesh, which was represented by the Hyderabad club until its split from Telangana in 2014) that does not have its own IPL team. It is home to Rajasthan Royals skipper Sanju Samson and former Royals players S Sreesanth and Robin Uthappa. It had a brief appearance in the IPL as the Kochi Tuskers Kerala, which lasted only one season.

Kerala boasts a plethora of stadiums, but only three have hosted international matches: two in the capital city of Thiruvananthapuram and one in Kochi. The Kerala Cricket Association is building its own stadium in Kochi, which will eventually hold 50,000 spectators.

Kerala, like Uttar Pradesh, has struggled in domestic cricket recently, with the exception of a semifinal performance in the Ranji Trophy in 2018/19, and would welcome the addition of an IPL team.

We at IPL highlight provide you detailed information about IPL2020. Here our readers will get all the information about the players in IPL, matches and all the related details in a synchronised and understandable way. So that users don’t need to gather information from various sources. We cover fantasy cricket team predictions also.