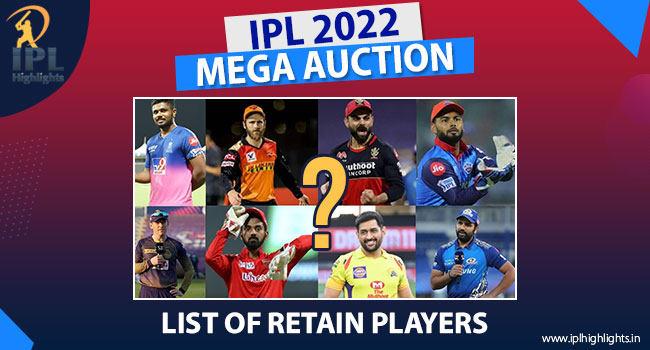 The IPL is all about opportunities. Many players may join the franchises now that multiple series is being played in the T20I arena. These guys will experience the excitement of competing in the world’s toughest T20 league. It may later assist them in advancing their careers. Every auction has an intriguing component called retention. Fans will be treated to a slew of surprises as well as new members of their favorite franchise. The BCCI will have a major auction this time, with the year 2022 fast approaching.

4 players from each team might retain in IPL 2022 Auction.

Let us take a closer look at-

Despite playing for the same franchise since the first edition, Indian captain Virat Kohli has yet to win an IPL championship. However, he is still the tournament’s leading run-getter, and he will continue to lead the team IPL 2022 Auction.

Devdutt Padikkal has been a consistent performer for Karnataka in domestic seasons and has had a strong start in the IPL.

Mohammad Siraj has been his skipper’s go-to bowler, and his powerplay and death bowling has been outstanding.

AB De Villiers has been a constant performer for the RCB team in the IPL, and despite retiring from international cricket, he is as fit as ever. He is anticipated to play a few more years in the IPL, which will be a huge plus for RCB.

Sanju Samson is the current captain of the Rajasthan Royals team, and his ability to play game-winning innings will constantly increase his value.

Tyagi should be the Royals’ next Indian player retained because he has proven that he can perform and has already demonstrated his ability in the U-19 Worldcup for India.

As a wicketkeeper-batsman from England. Jos Buttler is one of the most dangerous T20 players in the world right now, and he can quickly steal the game away from his opponents.

Jofra Archer is the best all-rounder who can help the franchise win games with both bat and ball.

Through his captaincy and batting, Shreyas Iyer has led the Delhi franchise to new heights, and the team came so close to winning their first trophy last year after losing in the finals.

Rishabh Pant has been in excellent form in recent months, particularly during the IPL 2021, where he led the Delhi franchise in the absence of Shreyas Iyer and led them to a table-topping finish until the tournament was suspended.

Prithvi Shaw was sensational for the Delhi Capitals this season, finishing as the fourth-highest run-getter in the IPL 2021. In the IPL, his aggressive style has posed a significant threat to the opponents.

Last year, Kagiso Rabada was awarded the purple cap, and he is currently one of the top fast bowlers in the world in all formats. The franchise will almost certainly keep him.

He was the team’s best run-scorer for several seasons and was vital in bringing SRH to their sole IPL victory in 2016. In the next seasons, he’ll most likely wear the orange jersey as well.

The right-handed batter from New Zealand has been a lifeline for SRH in recent years. He might be retained by the franchise since he has the capacity to modify the game’s tables.

The SRH selectors can justifiably retain the middle-order batsman because he has often risen to the occasion for his franchisee.

Since 2014, the right-arm pacer has been a vital member of the SRH team. He would be a likely retainer for SRH due to his skills—economy and rattling wickets.

His effectiveness as an opener has been crucial for Punjab Kings, as he is the team’s skipper. He’s been with Punjab since 2018, and he’s done a good job of leading his team’s responsibilities. He’s likely to be kept in the IPL 2022 Auction.

Agrawal has been crucial to the Punjab squad, not only in terms of joining but also in terms of assisting with the bat as an opener. The selectors may be considering him for re-election.

Shami has been a crucial bowler in Punjab’s squad since his arrival in 2018. His bowling prowess may just earn him a chance to stay on the team.

The ‘big show has been the man of big occasions, according to another member of the 2018 contingent. The selectors desire that he wear the Punjab jersey again.

Gill hasn’t been in the best of form lately, but he’s still young and has a long way to go in his career. Due to an injury, he will miss the five-match test series against England, although he is likely to return for the IPL 2021 second phase.

The skipper’s tutelage from England has helped KKR lead from the front. He could be retained by the franchisee ahead of the auction, barring his off-color in the IPL 2021.

With the bat, he is explosive and bludgeons the cricket ball to the point where the spectators are threatened. His six-hitting powers make him the franchise’s top choice player, and he can win games right away.

Pat Cummins demonstrated his all-round abilities in the IPL 2021 when he bowled and batted admirably.

With five trophies under his belt, he is the most successful skipper in the IPL, and he has also been a gigantic batsman in Indian cricket for the past five years. With the bat, he can be a match-winner, and his captaincy has been so impressive that he will almost probably be the first name on the scoresheet IPL 2022 Auction.

With the bat, his game-changing talent makes him a highly dangerous player, and he can have the same impact with the ball.

Bumrah has been India’s number one bowler in all forms, and he has also played admirably for the Mumbai Indians in the IPL.

He has been a great stalwart for the Mumbai Indians franchise for a long time and will be the lone overseas player retained by the organization.

Ravindra Jadeja will be the first player retained by the Chennai Super Kings in IPL 2022 Auction, and he is expected to take over as captain once MS Dhoni retires from the IPL. In all three categories, Jadeja has been a great player for the brand, and he has the ability to produce as a captain in the future.

Ruturaj Gaikwad is an up-and-coming young batsman who had a strong IPL season last year and has continued to make significant contributions this season. His outstanding performances earned him a call-up to the Indian national squad for the upcoming series against Sri Lanka.

Moeen Ali has been an excellent addition to the Chennai Super Kings franchise thus far, making an impact with both the bat and the ball in this season’s edition.

He has emerged as the best talent in the Chennai Super Kings squad since he is capable of doing everything on the field at a high level. He’s a wicket-taker who can also bowl in the death overs and is developing into a strong finisher with the bat.

So that’s how the IPL 2022 player retention is expected to look. While the above list is merely a choice, the retention regulations and purse reductions would have a significant impact. Regardless of the circumstances, the IPL 2022 Auction will be thrilling.