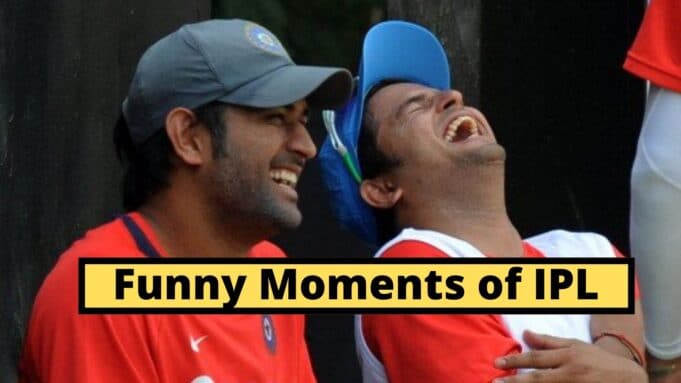 The Indian Premier League (IPL) is not only one of the richest leagues in the world, but it is also the most-watched cricket tournament. The league is more than simply a regular cricket match; it is a full-fledged show.

In its 13 seasons, the IPL has had some of its most memorable moments. IPL has captured some of the finest humorous moments on camera, and these moments bring out the best in the players while also keeping the game’s spirit alive. The best moments of the IPL are treasured by the fans and are remembered.

Let us remember some of the most hilarious moments from the Indian Premier League.

1. On captaincy debut, Sanju Samson pocketed the coin after the toss.

Samson made his IPL leadership debut against the Punjab Kings’ KL Rahul, and to commemorate the occasion, the Kerala stumper proceeded to pocket the coin after the toss.

During the post-match presentation, Samson claimed, ” The coin looked really nice so I pocketed it, asked the referee if I can have it, but he said no.”

It all started after DK made a stumping appeal after Shikhar Dhawan failed to clip a back-of-length delivery bowled by Varun Chakravarthy off his legs that was rolling down the leg-stump during Delhi Capitals’ run-chase of 155.

The only problem was that Dhawan’s foot never left the ground, and Karthik didn’t even make an umpire appeal. In fact, he was pleading with Dhawan himself, and the southpaw responded by falling on his knees while inside the crease.

3. Kiss by Warner to pollard.

This we can say is one of the funny moments of IPL In the 2013 IPL, David Warner and Kieron Pollard had a verbal spat on the pitch. A few words were exchanged between the huge West Indian cricketer and the Australian heavy-hitter. When Warner failed to deliver a Pollard delivery, the all-rounder approached him, but before he could brag, Warner sent a flying kiss to Polly. Pollard, being the melodramatic character he is, made an odd comic gesture with his face, as if he were saying ‘Ewwwww.’

This amusing occurrence occurred during an IPL 2015 match between the Royal Challengers Bangalore (RCB) and the Mumbai Indians.

Windies teammates Chris Gayle and Pollard had a heated dispute while RCB was chasing a difficult total of 210.

Pollard pleaded with the umpire to issue a warning to Gayle, but he refused.

Pollard then put a tape on his lips to convey his dissatisfaction.

The match between Bangalore and Delhi in the 2015 IPL was canceled due to rain. At the end of the day, the disgruntled audience had little to cheer about. On and off the pitch, Chris Gayle and Yuvraj Singh are close friends. It’s no secret that they have a peculiar sense of comedy.

As the rain began to fall, all of the players hurriedly made their way to the pavilion to avoid getting wet. Yuvraj Singh, who was playing for Delhi at the time, pushed Gayle in a nice manner on the way back. Gayle retaliated by chasing Yuvraj Singh with his bat. This exchange rekindled the crowd’s dissatisfaction with the situation.

Rohit Sharma pays a visit to the 6 year old who was struck by...