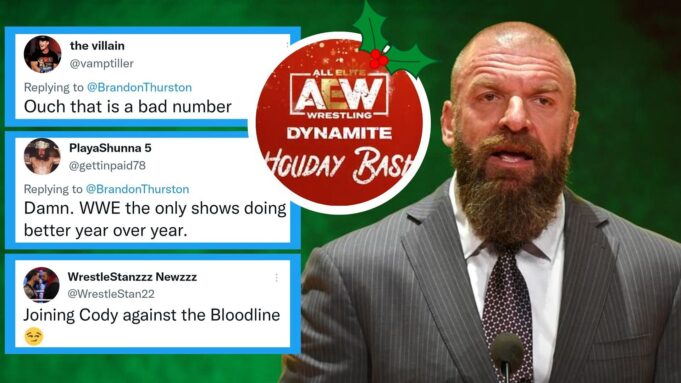 AEW fans recently shared their thoughts on the ratings for this week’s Dynamite: Holiday Bash.

The Christmas-themed special episode featured several marquee matches. In the main event, Jamie Hayter put her women’s championship on the line against Hikaru Shida. It was Hayter’s first title defense since winning the belt from Toni Storm at Full Gear.

Last year’s show featured a dream team of CM Punk, Sting, and Darby Allin in action against FTR and MJF in the main event. The show last year drew 1,020,000 in average viewership and a 0.37 rating in the key 18-49 demo.

According to Brandon Thurston of Wrestlenomics, this year, the ratings were 957,000 and 0.30, respectively, marking a significant drop off year-on-year.

There seemed to be some frustration surrounding the seeming lack of growth behind Dynamite. Especially where there was some expectation for the Wednesday night show to push against WWE’s current lineup.

Some, like the user below, pointed out the fact that only WWE has seen year-on-year growth in their stats.

Others looked to keep the focus on AEW, like the user below, who expressed a desire to see Dynamite score better with the key demographic.

@BrandonThurston So there’s no drastic changes in these numbers. How do continue to grow the audience?

@BrandonThurston So there’s no drastic changes in these numbers. How do continue to grow the audience?

While many fans wanted to see AEW break the million mark in terms of total viewers, others seemed concerned about the promotion’s inability to grow.

If you’re interested in sports betting, the San Francisco 49ers play the Washington Commanders this week! Don’t miss out. Claim the offer and place your bets below!

What went down during this week’s AEW Dynamite: Holiday Bash?

This week’s show featured a main event between Jamie Hayter and Hikaru Shida. Hayter won an intensely physical bout before a brawl broke out between Britt Baker and Toni Storm. Saraya emerged to chase Baker and Hayter away.

Match five of the Best of Seven Series between The Elite, and Death Triangle saw the first gimmick match of the series. The two teams fought a No Disqualification contest featuring several Holiday-themed weaponry. The Elite won to keep themselves in the running for the AEW Trios Titles. The scoreline is now 3-2 ahead of match six, a Falls Count Anywhere clash.

HOOK defeated Exodus Prime in quick fashion, and Jon Moxley had an impressive outing as he beat Darius Martin. FTR was shockingly defeated by the Gunn Club in their third loss on the trot.

What did you make of this week’s Dynamite? Join the discussion in the comments below.

Why are fans slamming TJ Dinch and calling him a “hater”?