Home IPL 2022 Steph Curry reflects on other spheres of his life besides living as... 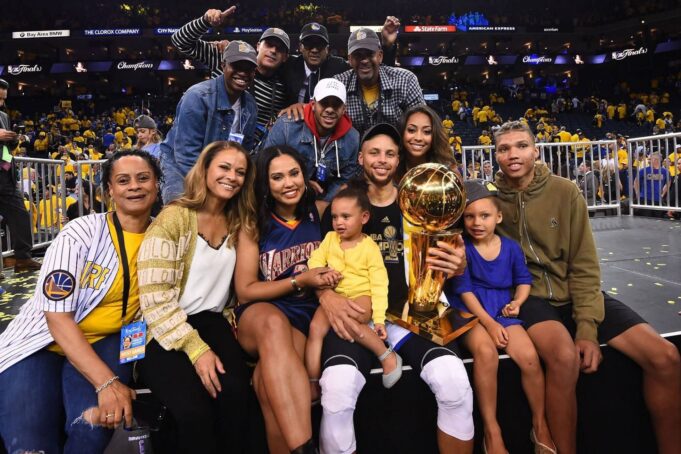 Steph Curry is well known for his on-court greatness and accomplishments with the Golden State Warriors. While he may be a star on the court, he values his responsibilities as a father to his three cheerful kids.

In a recent inverview, Curry shared his life as a dad to his kids. When the eight-time All-Star was asked if he thought his children were impressed with him, he simply answered with this:

“I would hope to say yes, but probably for different reasons. I don’t think they care too much about how many times the ball goes in the basket.

“They’ve been to a couple parades and all that, so they enjoy the festivities of celebrating a championship. But when you’re at home you’re just Dad and that’s the best part about it.

You get to watch them grow and blossom and find their personality and support them and have fun with them. They like my goofiness and the way you just show up at home more than anything.” @StephenCurry30 movieguide.org/news-articles/…

You get to watch them grow and blossom and find their personality and support them and have fun with them. They like my goofiness and the way you just show up at home more than anything.” @StephenCurry30 movieguide.org/news-articles/…

“You get to watch them grow and blossom and find their personality and support them and have fun with them. They like my goofiness and the way you just show up at home more than anything.”

Curry’s children have all had the opportunity to be with their father’s game. Back then, Riley went viral as she was with Steph during a postgame interview and stole the show on two occasions. Since then, his family has had a tighter association with the league.

Riley’s younger brother recently made waves on social media. Canon (4) walked to the locker room with his dad, and Klay Thompson was close behind. While walking, the young Curry turned around and greeted the other Splash Brother. Clearly, Thompson was caught off guard, like the rest of us.

Steph Curry is a record-breaking player in the NBA for his talent and on-court greatness. However, the Warriors haven’t played as impressively as they’ve fallen to 10th in the Western Conference with a 14-14 record. Even with Curry’s spectacular 2022-23 season, the team hasn’t played well, glaringly on the road (2-14).

One way to fix their season struggles is if Curry decides to score on every possession. But everyone knows that’s not a smart gameplan. However, it could be effective as there’s really no player in the NBA that could stop Steph. This way, he can help Golden State get some wins and break a few records.

Klay Thompson currently holds the record for the most made 3-pointers in a single game with 14. Curry has proven he can make more than 14 when he set the record during the 2022 All-Star Game and made 16. He finished that game with 50 points to win the Kobe Bryant All-Star Game MVP award.

No one expects the Baby-Faced Assassin to score 50 points in every game, but people are aware that he’s capable of doing so. If breaking a record could breathe life into their difficult season, Steph Curry should start warming up to boost his team’s energy.

“I want to be honest with you”