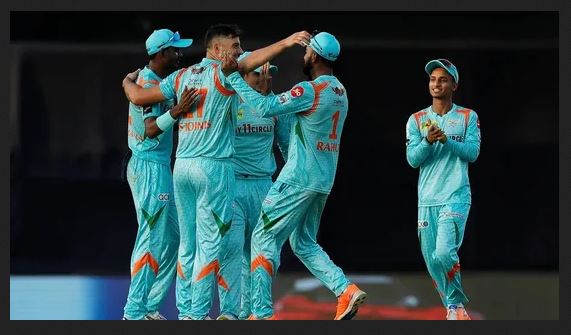 The Mumbai Indians (MI) was defeated by the Lucknow Super Giants (LSG) by 18 runs.

The 103 runs from 60 balls of KL Rahul combined with the 2 early wickets from Avesh Khan and the sloppy fielding of the MI team resulted in the loss of the MI team. This defeat brings down the chances of a win for the MI team in this season of the IPL.

Nothing seems to be going right for the MI team after they won the toss. The batting was without any significant partnerships, the bowling was wayward and the fielding can be termed ‘forgettable’.

The mixed bag in the power play

MI team used 6 different bowlers in the powerplay but this did not seem to bother the LSG team. They did what needed to be done with de Kock crunching Unadkat for 2 fours in the same over and followed this with 2 more fours in the next over against Ashwin. Rahul trudged to 12 runs off 15 balls before taking Tymal Mills for 2 fours and a six in this over of 16 runs. De Kock got out on the third ball of Fabian Allen, but not before hitting a six and a four off the first ball of Manish Pandey. The LSG had a good foundation of 57 for the loss of 1 in the powerplay.

The MI team bowlers made all the mistakes possible with their bowling and fielding. They had to pay a heavy price for this with Rahul and Pandey hitting boundary in every over. Rahul managed to strike 3 sixes for half-century in 33 balls.

Rahul seemed to be looking better with each passing ball. Pandey got bowled for 38 runs by Ashwin. Rahul proved his mettle against Allen with 18 runs in one over. Bumrah seemed to have some sort of control and kept him going with only singles or a couple. At the start of the 17th over, Stonis fell and Unadkat and Bumrah conceded 22 runs in 3 of the last 4 overs. This kept the LSG under 200.

Before this game, Avesh had a stellar record against the MI team. In this match he managed to get Brevis hand a catch and Rohit to edge behind. Brevis had hit his first ball for a 4 and unleashed some ‘heavy’ blows in his 31 runs in 13 balls. In the 5th over he hit Dushmanta Chameera for 6 and 2 fours. He even hit Avesh for ‘back-to-back’ fours in the next over in 8 balls. MI team, now, needed 84 runs off 42 balls.

Varma’s stay ended with pinpoint Yorker of Jason Holder. Suryakumar managed to hole out deep wicket of a top edge. Now, the MI team needed 68 runs off 24 balls. The consecutive sixes of Pollard managed to bring down the equation but the MI team was always falling short.