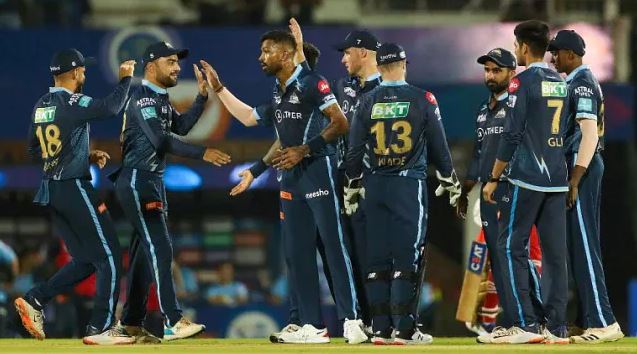 When the season started, the GT team was considered to be a team sans any experience or squad balance. Their wins initially seemed to be ‘beginner’s’ luck, but now with their 10th win in 13 games, this team has proved its strength.

This match saw the GT team literally bossing over the CSK team that was already overwhelmed. This team did not go for any experiments with their team like the CSK. The ‘in form’ team proved to be a bit too much for the CSK team.

An innings of ‘stop-start-stop’

Dhoni preferred batting first so that the team did not have to bear the heat. This worked in an adverse manner. Ruturaj Gaikwad managed to make 53 runs in 49 balls. He was unable to hit big shots. He seemed to be exhausted when he was dismissed in the 16th over. He was satisfied with the ones and did not attempt any 2 or more runs.

Mohammed Shami got the new ball to hold the line and caused an attempted flick that ended as an edge. This was the wicket of David Conway.

Moeen was in at No. 3. He managed to hit 2 sixes in the 6th over to Rashid Khan but was dismissed for 21 runs made in 17 balls.

The innings of the CSK team to fizzle out after Shivam Dube and Gaikwad were dismissed in quick succession.

In the last 5 overs there were no boundaries made and only 24 runs were picked up. Off the last 3 over’s, Rashid managed to concede only 14 runs.

Saha as the leader

The CSK team was, now, looking for an ‘early’ wicket. Mukesh Choudhary went all out to get Wriddhiman Saha. Saha started off with 2 boundaries off Choudhary, and was dropped at 21.

Saha did not mellow down but managed to pull off the first 6 of the innings off Simarjeet Singh. The GT team was 45 for no loss after 5 over’s. Shubhman Gill had managed t score only 7 runs off 7 balls.

Matheesha Pathirana, a debutante, finally managed to get Gill. He had managed only 18 by this time.

The CSK team was looking for another wicket. This did not happen. Saha and Matthew Wade seemed to settle for a stand of 31 runs. In the 12th over, Wade was picked by Moeen. Hardik was the 2nd scalp of Pathirana. The GT team was, yet, ahead as they needed only 37 runs from 43 balls.

Saha managed his 3rd fifty and hit the ‘winning’ runs off the 1st ball of the last over. He finished off by making 67 runs from 57 balls. A sedate 15 runs from 20 balls was made by Miller. This brought the team home.